I’ve been back in civilization for over a month, now. Not that you’d know, blog-reader. I didn’t exactly do a great job of posting here. With another hiker I’d been traveling with for some time, I reached the northern terminus on August 31 around 10:00am, stuck around long enough to take a few pictures, brew up a celebratory cup of mocha, and, shivering in the freezing rain, turn back to Hart’s Pass. Two days after returning to Seattle, the fire closure north of Steven’s Pass reopened, and I headed back out to complete the section. I got about 40 miles in, but a trip on the stairs the night before I left and a subsequent fall on the trail (I’m a little clumsy) left my knee pretty tender, and I bailed at the North Fork of the Sauk River.

Back in the land of paying rent and needing a job and pissing in a toilet, I’ve spent a lot of time thinking about the trail and wrestling with reintegrating into city-life. 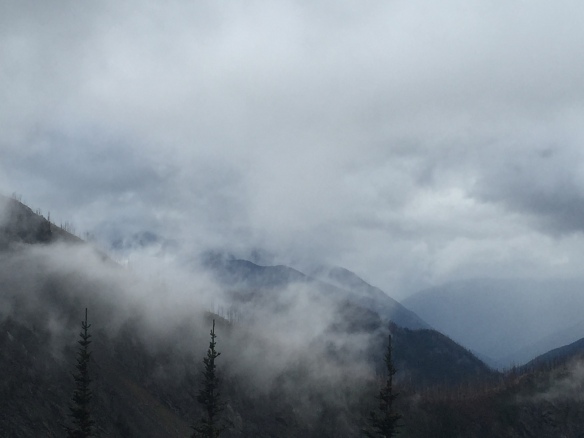 Pasayten Wilderness, WA … about 15 miles south of the Canadian border

I spent a while visiting with family in Michigan before returning to Seattle in the middle of September. Since then I’ve been job-hunting and interviewing. I’ve had plenty of time to write here, but for some reason haven’t found the necessary resolve to do much of anything but go for a run in the morning and show up at prospective employers and pretend (unconvincingly, it seems) I want a job, and sit listlessly at the neighborhood coffee shop, watching the colored leaves gather along the curb across the street.

I knew upon setting out for the PCT that I would struggle when I returned to civilization, but it is a daily effort to push myself out of the house and go back to my routine and try to find joy in my new life. People don’t want to hear about the trail, or my “trip” as many call it, and I don’t know how I’d talk to them about it anyway. It’s difficult to convey how I feel to people who haven’t thru-hiked, and it’s proven to be an acutely lonely endeavor. 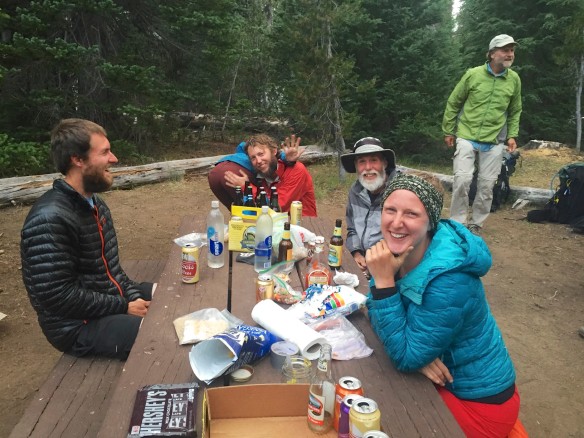 Enjoying the spoils of an established campground at Crater Lake, OR with Ricky Bobby, Ass Patch, Olestra, Forest, and Lucky. 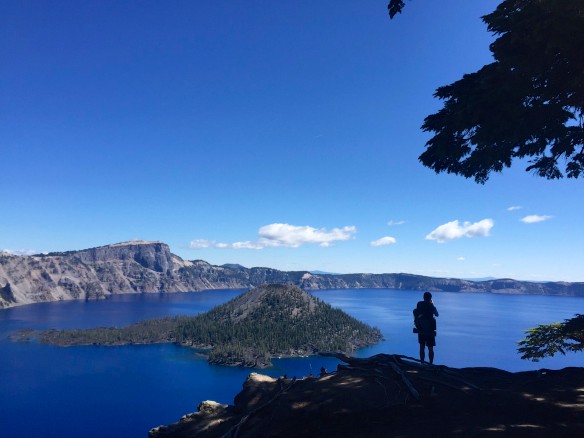 Sunset and moonrise were rendered a hazy red by the smoke from nearby wildfires; Charlton Lake, OR 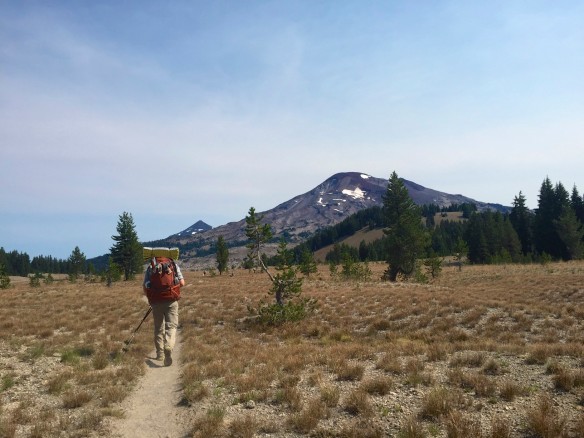 My favorite brother came out and hiked a bit with me! He’d never been backpacking a day in his life, and we cranked out 125 miles in four days. He’s a badass. 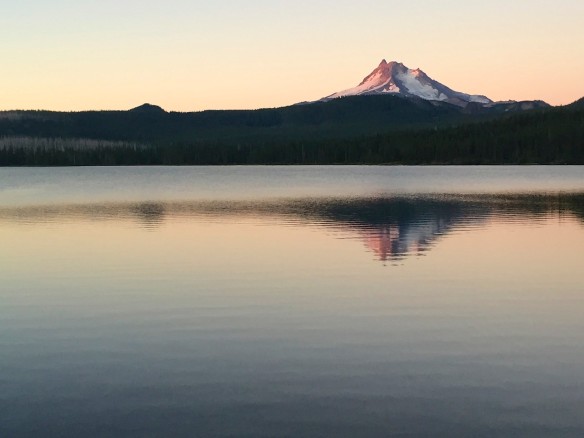 Waking up on Ollalie Lake, OR 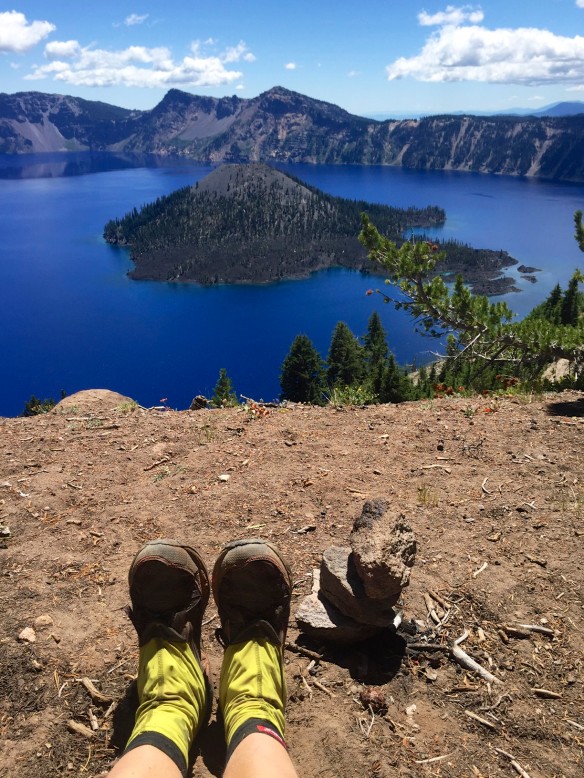 I can’t say I don’t love taking showers regularly and sleeping in a comfortable bed, having Wi-Fi and drinking pretentious coffee or the absence of ramen-with-peanut-butter from my diet, but everything reminds me of the trail. It consumes my thoughts.

I notice the size of everyone’s backpacks and messenger bags, even though they’re just commuting downtown to work.

I pull on a cotton shirt and slip between flannel sheets and I think about when I couldn’t do that—when I didn’t have that luxury—and I reveled in it.

I sit at my desk in my room and think about why I have so many things, when I lived so contentedly out of a backpack, wanting for nothing.

I miss the meaning and the specialness everyday things and activities took on—taking a shower, drinking a beer, sinking into an uncomfortable motel mattress.

I ache to see leaves and dirt and stone beneath my shoes.

It seems incredible to me that I must now assimilate to an ordinary lifestyle. I’m expected to.

I guess I’m afraid I’ll turn into the person I was before.

I don’t know how, exactly, I’ve changed. I think mostly in small ways, but many feel incredibly significant. I’m far less cynical. I feel that I have far more genuine compassion for and interest in people—strangers and friends alike. I grew up in a conservative and oppressive community, and for the first time, out on the trail, I really felt free. Free from community-specific expectations; free from the inundating pressures of physical appearance and expectations of female docility and my “cultural role”; free from the impossible expectations I put upon myself.

Pretty stoked to run into Johnny Walker on my last stretch! Hiked 250 miles with him in Southern California, and hadn’t seen him since!

The strangely quiet Rainy Pass on highway 20 in Washington… the road had been closed for nearly two weeks due to rock slides.

2300 miles. After a while, these milestones don’t really feel that impressive.

It wasn’t always easy. There were days, and weeks, even, wherein I wanted to quit. It was hot and humid and buggy and steep fifteen-mile climbs over blowdowns and poorly-maintained trail, and a trough of emotional things to work through. My father sent me an email in late May as I was traversing the Mojave and wondering if I was going to make it even just through Southern California. In what proved to be the most invaluable advice I received on my hike, he wrote “Where ever you go, you bring all your shit with you. Doesn’t matter if you’re on the PCT or working 7 to 3:30 at some job somewhere, married with a kid or two. This might be the time and place for you for you to exist alone with some of your shit, but it might not be… I hope that you don’t keep on with something, anything, when your guts are telling you otherwise. My hope for you is that you pay attention to your body and soul and what they are telling you. If it’s time to keep going, you will know. If it’s not, you’ll know that too.”

And I don’t know what to do next.

I know I can’t afford it, but I find myself perusing the Continental Divide Trail website, as well as the PCT site, parsing through my pictures and wishing I could spend another summer–next summer–out on the loose. I think about ways I could possibly incorporate a thru-hike into my life—and I realize that I want it to be my life. And I don’t, simultaneously. I’ve never felt so conflicted. 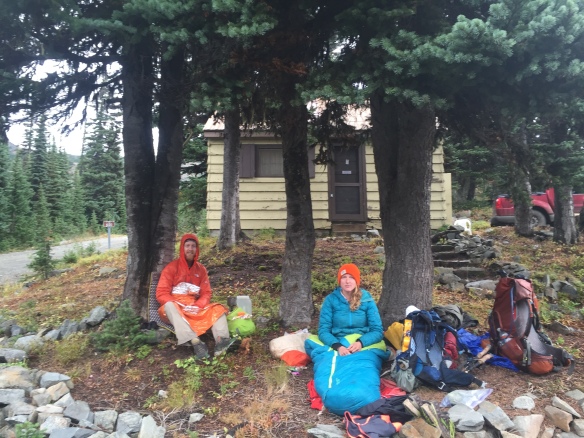 Embodying the Hiker Trash that we are… waiting on a ride down to Mazama, WA from Hart’s Pass a day after completing the trail. 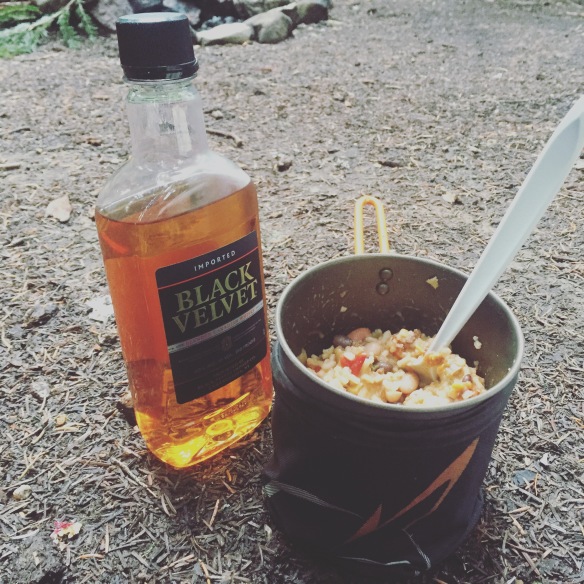 Dinner is a fancy affair.

It’s not getting much easier, really, just more routine. My current BS job is incredibly boring and monotonous and requires only the bare minimum of mental functionality. I sit at a table with a middle-aged woman and try to explain that this (nearly identical) white has more green in it, and that was more of a purplish hue, and as they’re weighing their incredibly superficial options, I space out. In the vast array of green and brown color swatches adorning the walls, I see the woods and the earth and the 12″ wide trail curling its way through the trees; in the whites and greys and blacks and blues, I feel the vast granite of the Sierra towering over my small existence and I sometimes have a hard time keeping it together long enough to sell a gallon of paint. I have a hard time keeping it together at all, sometimes.

stop and taste the huckleberries 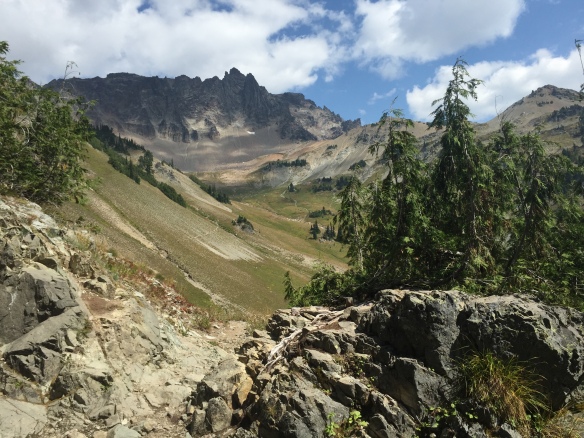 I don’t know what’s next, but I find myself hoping that this isn’t the end.

Hoping and thinking and tentatively planning another adventure. 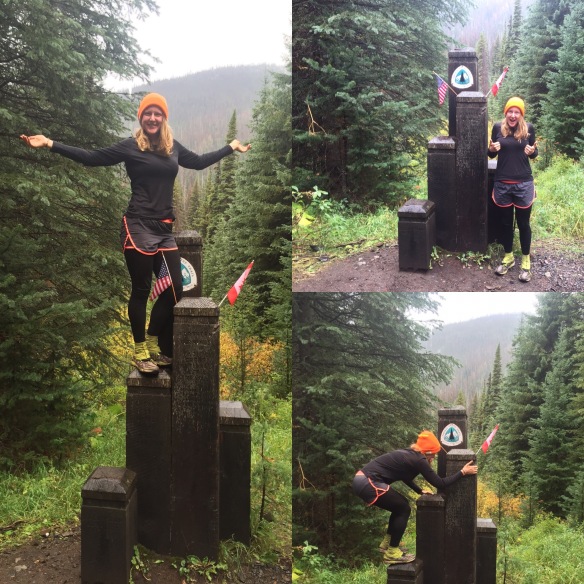 Reaching the monument at the Northern Terminus on August 31, 2015

My final entry in the last trail register.