Ilan and I were sitting on a large water tank at the end of a long, mostly unused, dirt road, watching the sun set over the San Felipe hills. As it curled down behind the soft peaks, the sky lit up orange and purple and red. I laughed. It seemed almost comical. “I feel I’ve known you for six months, at least,” I said, cozying into my down jacket, drawing the hood around my neck. The were muffled scuffs in the dirt below us as another hiker filled his water bottle from the drip, his white shirt now tan, skin sunburnt and covered in a thick layer of grit. 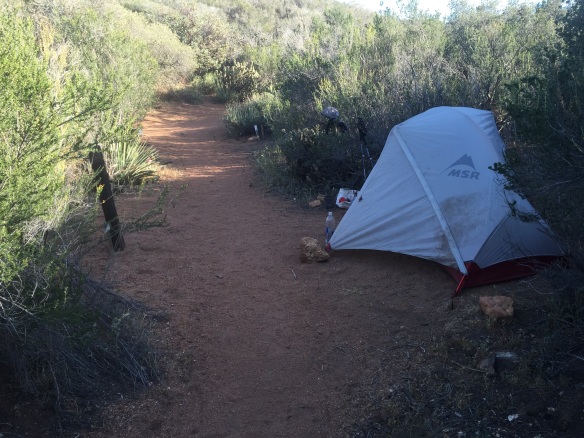 Camping outside the resource center at Warner Springs 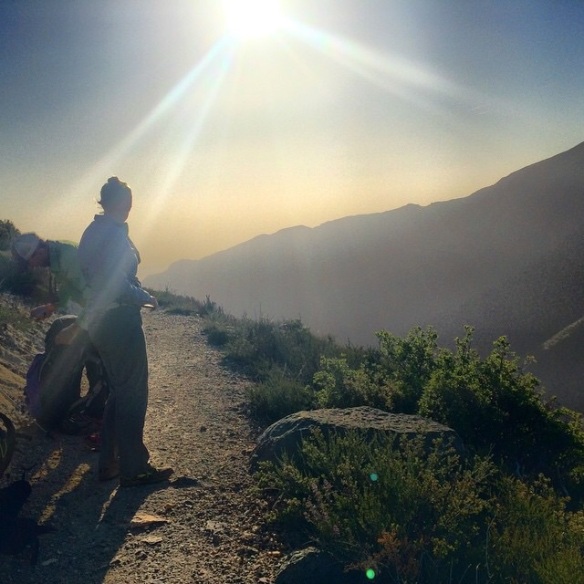 The Southern California desert is far more beautiful than I ever expected. Dry, inhospitable hills rise over flat valleys dotted with shrubs and faded grass. The trail climbs miles of switchbacks through steep embankments featuring dozens of cactus species and tall, asparagus-looking flowers. The days are hot and impossibly arid, but eased by a consistent breeze through the hills. 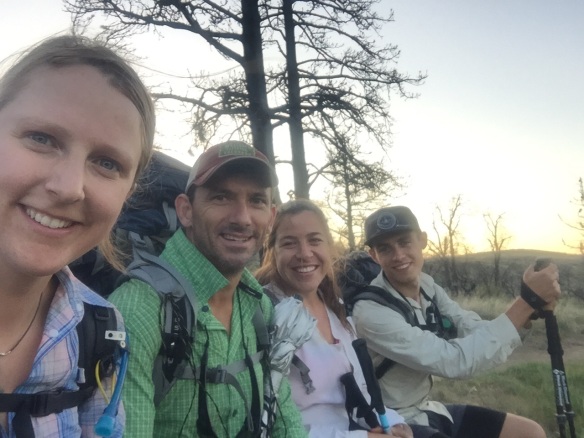 Me, Nick, Beth, and Ilan

Water hasn’t been a serious issue for me yet–in fact I’ve been carrying a little too much out of fear of running out. My longest carry so far has been about 23 miles, but if I can push through some good mileage in the morning, usually between 6:30-10:00am, I’m good for the afternoon.

As I write, I’m at a small resource center in an unincorporated community called Warner Springs.I’ve just ingested a delicious breakfast of pancakes, sausage, and eggs, complemented by strong coffee and the animated tunes of Blisters, a fellow hiker who has dug up a guitar from somewhere and is entertaining the room with a round of Disney songs, Radiohead, and The Eagles.

At day six, I’m at mile 109, and I feel I’ve been out here for a month at least. Every day is intensely stimulating–the terrain, the physical work, the hiking tactics, the people.

I set out from the border with about 13 others who’d all stayed with the same trail angels in San Diego, and kept with five of them over the next several days. Hiking at the same pace, we passed most of the hikers who left the same day we did, and as we pressed on, those who’d begun a day, two days, three days before us. I’d planned on hiking conservatively the first week… 15-18 mile days to ease into the work, but I felt strong and able, and the second day out, I pushed passed the marathon marker and hiked 27 miles. My feet were sore, but I was happy.

As of yet, the physical output hasn’t been huge. My conditioning has definitely contributed to my ability to hike so far so quickly, but the trail is well graded and I’ve only run into several miles of loose rock and deep sands–both of which will slow this girl down pretty substantially. Mostly my feet are just sore and I have to stop to patch up blisters and hot spots every several hours as well has clean my socks and shoes out of grit to help prevent too much friction. So far so good.

Beyond the beauty of the trail–which astounds me on an hourly basis–are the people. Everyone I’ve met is friendly, interesting, generous, and kind. I’ve met a retired NASA engineer slowly plodding his way north alongside a thickly bearded thirty-something who never graduated high school, whipping around the curves in the trail.

It’s an incredible place to be and one of the most lovely, forgiving, and understanding communities I’ve ever had the pleasure of encountering.

I’m so happy to be here.

4 thoughts on “The Days Are Just Packed”