Over the last several days I’ve been moving through innumerable and often contrasting thoughts and sentiments. A lot of doubt, and then erratically leaping to enthusiasm. Apprehension. Love. Strength. Fear. Weakness. Excitement. Joy.

On Friday, I borrowed my roommate’s 1982 Subaru and drove north. I don’t drive that often, and my hands were glued to the wheel and gear shift, the engine roaring beneath the worn muffler. The morning was warm and mild, clouds hung high over the Cascade peaks as I turned east. Driving on Highway 2 always makes me think of Michigan. The road’s eastern terminus is St. Ignace, MI and it winds gracefully along the northern shores of Lake Michigan–a route I took many times between my hometown and college.

My destination on Friday, however, was just beyond Skykomish to a recently rehabilitated trail to Beckler Peak. The forest road was long and full of potholes… it took me nearly a half hour to drive the 6.5 miles to the trailhead from the highway. There were only a couple cars in the gravel parking lot when I arrived, and after donning my mostly-full pack (about 20lb), I started up the trail. It was boring at first. An old logging two-track, the trail is wide and grassy with hyperbolic switchbacks past tree stumps and eroding ridges. I started to get hot. My long sleeves and pants stuck to my limbs, and my ears were fiery beneath my headband. Shit, I thought. It’s only 60 degrees. What am I going to do in the desert for two months? My legs began aching, my heart rate jacked. I paused in the middle of the trail. Caught my breath. Waited for my legs to regain their normal composure. Pressed on. Stopped again a minute later. Just twenty or thirty seconds. Continued up. How am I ever going to make it 2,660 miles? I found myself contemplating. I’ve only gone two so far today. The road turned into a trail as it entered third growth forest as giant western cedars towered over my head. I stopped to listen to the creak of the branches. To hear the sounds drowned out by my daily city life. 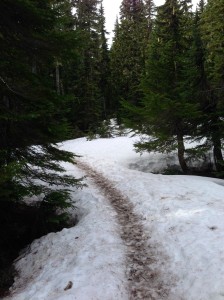 I heard voices above me, distant at first, and then closer as I rounded a few switchbacks. I traversed a small snow field and met up with four women chatting on the trail–one headed down, three on their way up, all in their 50s or 60s. One, Diana I later learned, noticed my pack. “Is that a ULA? I’ve got the Circuit & the CDT. Great packs.” And off we flew into gearhead mode and trail talk. They were all familiar with the PCT–Diana lives very near The Dinsmores at Hiker Haven in Baring, WA, and works at the Skykomish Deli–both necessary stops for any thru-hiker. Another works at the visitor’s center at the Ranger Station in Snoqualmie Pass. I pushed on, knowing the summit couldn’t be far off now. 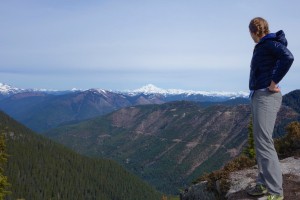 The views, suddenly and somehow, made everything worth it. Made me forget the work I’d done to get there. The three women joined me several minutes later, and they named each of the peaks for me, telling stories of previous hikes or commenting on this glacier or that, and which fed what lake or watershed. They asked me about my preparations and wished me well, and told me to come find them when I passed through.

And then I left.

It had me thinking about the nature of relationships of all sorts–long or short term, professional, platonic, romantic, familial, even the small, brief moments spent on mountaintops with those momentarily intimate kindred spirits. There are some relationships I know won’t survive quitting my job or the five months I’ll be hiking the PCT. What do you say when you look into the eyes of a friend you know you’ll never see again? As one of my favorite authors, Jonathan Safran Foer, writes, “So many people enter and leave your life–hundreds of thousands of people! You have to keep the door open so they can come in–but that also means you have to let them go!”