Trail language is brimming with monikers & all around strange turns of phrase, and hikers love their acronyms. It took me a full month to catch on to all the shorthand, and I’ll be the first to admit I’ve fallen into the habit of using trail-speak with Regular People. You know. Those folks who don’t take half their year to walk across the country. That’s you, probably, typical blog-reader.

I’ve taken the liberty of compiling a small dictionary. Some of them are less intuitive than others. Some are stupid.

Cairn: (n) A stack of rocks ranging from two or three small stones to massive altar-like structures which mark the trail where it may be difficult to follow (over rock or open forest floor). 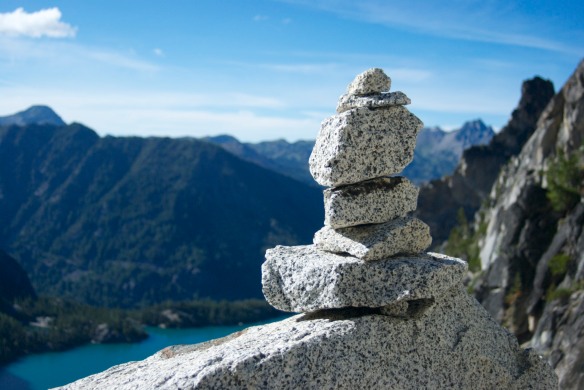 Cairn on Asgard Pass, a steep and rocky climb with no well-defined trail.

Yo-yo: (adj) Hiking the entire trail, and then simply turning around and doing the whole thing over again. (I know).

HYOH: (v) Hike Your Own Hike. I love this one, and it’s often thrown around during all sorts of conversations. Do your hike on your own terms–go at your own pace, eat what and when you like, filter your water or not, take this gear or that, take this alternate route or don’t. Don’t hike on someone else’s agenda.

AZDPCTKO: (N) Annual Zero Day Pacific Crest Trail Kick-Off, sponsored by Trail Angels, the PCTA (I think), and a bunch of fancy big name outdoor gear companies. Located at Lake Morena Campground in California at PCT mile 20. Gear companies sell cool stuff at sweet prices (but you probably don’t need anything by then, as you’ve already begun your hike), locals give water & snow reports for Southern California and the Sierra as well as trail closures, and you get to meet a bunch of fellow thru-hikers! This year, there are two kick-offs to accommodate the trail’s growing popularity, both at the end of April. I’ll have passed the area by then, but am considering hitching a ride back just to see what all the fuss is about.

LNT: (N/v) Leave No Trace, the most important of backcountry ethics. Clean up after yourself, and don’t be a dick. Pack out all of your trash including food scraps, make sure to dig your cat hole at least six inches, respect wildlife, minimize camp and hiking impact, and consider others around you.

BPW: (n) Base Pack Weight–i.e., how much your pack weighs minus consumables (water, fuel, food). Ultralight packers boast a BPW under 10lb, lightweight is under 20lb, and anything over is considered traditional backpacking.

Cache: (n) An unnatural occurrence of water in the wilderness, where someone has left behind jugs of the sweetest of chemical compounds just when you thought you were going to die of thirst. Questionable alignment with LNT.

Bounce Box: (n) A form of resupply wherein a hiker will mail a box or a five-gallon bucket ahead to herself with items she doesn’t need every day, and doesn’t want to carry. Upon reaching town, she’ll pick it up at the post office, enjoy and refresh its contents, and mail it out again to herself further on up the trail.

PCTA: (N) Pacific Crest Trail Association. They maintain the trail, and are a wealth of information on anything from water sources ad bear sightings to gathering the necessary backcountry permits and caring for your blisters. They’re pretty great, and they take donations.

Flip Flop: (v) Thru-hiking the PCT, just not all in order… usually a result of wildfire closures or snow pack. For example: hiking north to the Sierras, then flipping up to BC and hiking south to that same point.

Posthole: (n/v) The energy-sapping, annoying, but unavoidable result of walking through deep snow–when your leg collapses the snow and sinks in up to your thigh, requiring a strong lift, and often resulting in another post-hole.

Triple Crowner: (n) A Thru-hiker who has completed the Appalachian Trail (AT), the Continental Divide Trail (CDT), and the Pacific Crest Trail (PCT).

Yogi: (v) To convince, persuade, or inveigle locals/day-hikers into giving you food/water/a ride without actually asking for it. This can be a true art, and one at which I imagine I will not excel, as I don’t think I’m particularly charming or graceful. Here’s to hoping, though.

Trail Angel: (n) Basically anyone who gives you a hand on the trail, be it a ride to/from the trail, letting you camp out in their backyard/garage/house, giving you food/water, etc. Some trail angels are just passing day hikers, and some take on the duties full time. The Dinsmores near Stehekin, WA for example, put up PCT thru-hikers in a special-built dormitory, hold packages, have showers and laundry and all the modern conveniences you’ve forgotten about. They do it for free, but a little donation doesn’t go amiss.

Trail Magic: (n) Anything done by a Trail Angel, essentially. Sometimes its small (a beer or soda cache & some snacks near a trail head), and sometimes it’s a full-fledged mobile restaurant. I heard this excellent story on NPR in December about a pop-up cafe set up on a picnic table at Sonora Pass for thru-hikers, complete with a pancake breakfast and free wifi.